8.30 John introduced a former colleague who was involved with second life in the past, called Locks Aichi.The early part of the class was for housekeeping and getting everybody present up and running. John told us not to worry about typos when chatting with other members. I think he said it was not considered good practice to coorect others’ typos (that is on purpose!).

John asked that all links to blogs be posted on Facebook page. We were then asked what were our experiences visiting other parts of second Life. Whatyemaycallit told us how she had started dancing in some pub and didn’t know how to stop

The reading for next week is the short story by Ursula K Le Guin called The Ones Who Walk Away From Omelas (1973).

The class was divided into five groups. In Group 3 with Saoise and Jack Mittens.

Two photos of meeting are attached below. 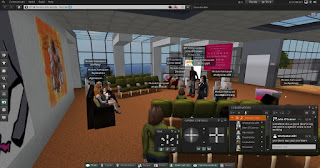 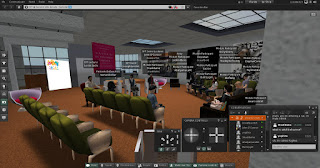 Posted by Amarcordcat at 12:53 No comments:

Still finding our feet in this strange land, and learning to walk without bumping into things. We are still testing microphones and sorting out other teething problems. Glenn did a technical support class yesterday evening. We are learning the protocols in a class group situation and can see who have their microphones on at any one time.

We are learning that it is necessary to give definite cues in Second Life e.g. Yes, No, as one of the group participants may have briefly walked away from their computer.

Have only just learned how to sit down: by clicking the object and then sit.

We read Stephen Duncombe’s  introduction to Open Utopia based on Thomas More’s Utopia.

We were then lead onto the balcony by the course leader and experimented with the light controls. One image from the class and two from the balcony are shown below. 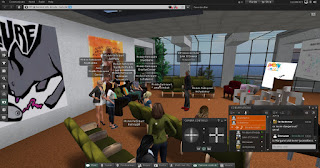 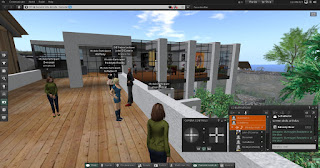 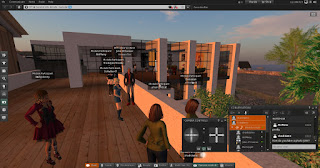 WEEK 1 - 8th February 2017
I joined Second Life and was baptized Amarcordcat, a nod to my favourite Fellini film. I was under the misapprehension that we  were to remain anonymous so chose a suitable ‘disguise’ as a young female avatar. A few days before  the first 8.30 pm class on Wednesday 8th February I watched the Youtube video that Glenn had linked to his email. A number of fellow Sherkin Second Lifers had mentioned the Blarney Stone Pub so I put that in the location search and visited there while learning to manoeuvre the avatar. The place was pretty sparse and had five or six  ‘cool dude’ avatars hanging around. It would have been clear to the other members there that I was just learning how to move the avatar. I was a bit surprised to get a message in my email from someone in the pub asking ‘Do you like Guinness?’ My avatar had ‘pulled’!

We had been sent the link by John showing where the class was to take place. When the class started at 8.30 John and Glenn introduced themselves. It was fun trying to guess who was who. It was then I learned that each avatar would be identified with the student. I decided to stay (semi) anonymous for one class and gave name as Marcella and asked in text what time the Maths class started. One of my fellow students kindly answered that it was a DIT BA class but her ‘Ha Ha’ at the end indicated that she knew I was joking, but did not know ‘who’ was joking.

The class the tested each microphone and we each became ‘friends’ with the other group members. I look forward to seeing how it will develop on Wednesday next. Two .jpg images of the lecture room taken during the class are shown below. 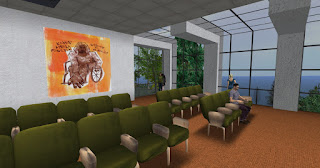 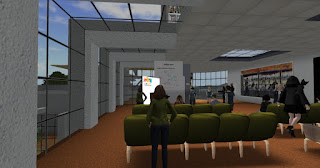